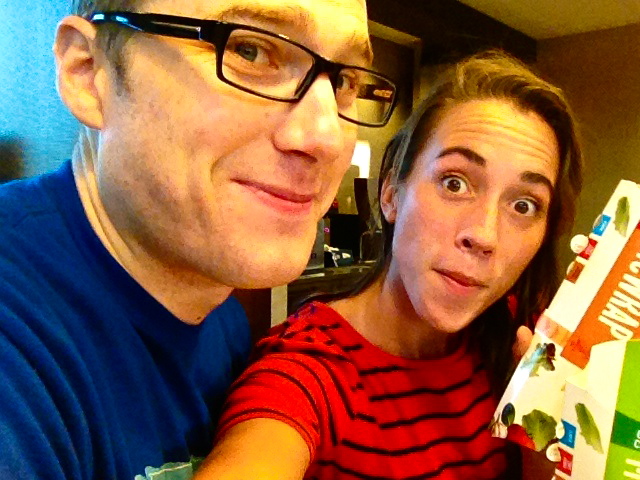 [Looks more like the karate HIYAH! than what I intended it to be.]

Well, Zane and I attempted to go on a date. It is such a foreign concept to us... considering the whole, medical school thing. Ain't no thang.
[Actually it totally is a thang. There is no such thing as a "weekend" in Medical School Land, therefore a "date" is an endangered species.]

We found our golden ticket to the golden arches in the mail on Friday. Two coupons for wraps and drinks! It was a glorious event. The emotions were very reminiscent of the following vidja. You must watch the first 30 seconds to fully understand. If you watch any further, you may go slightly insane.


Our McDonald's date was simply wonderful :]. The new wraps are SO GOOD. We drove on this little backroad that we had never seen before and found the perfect spot to park and eat. 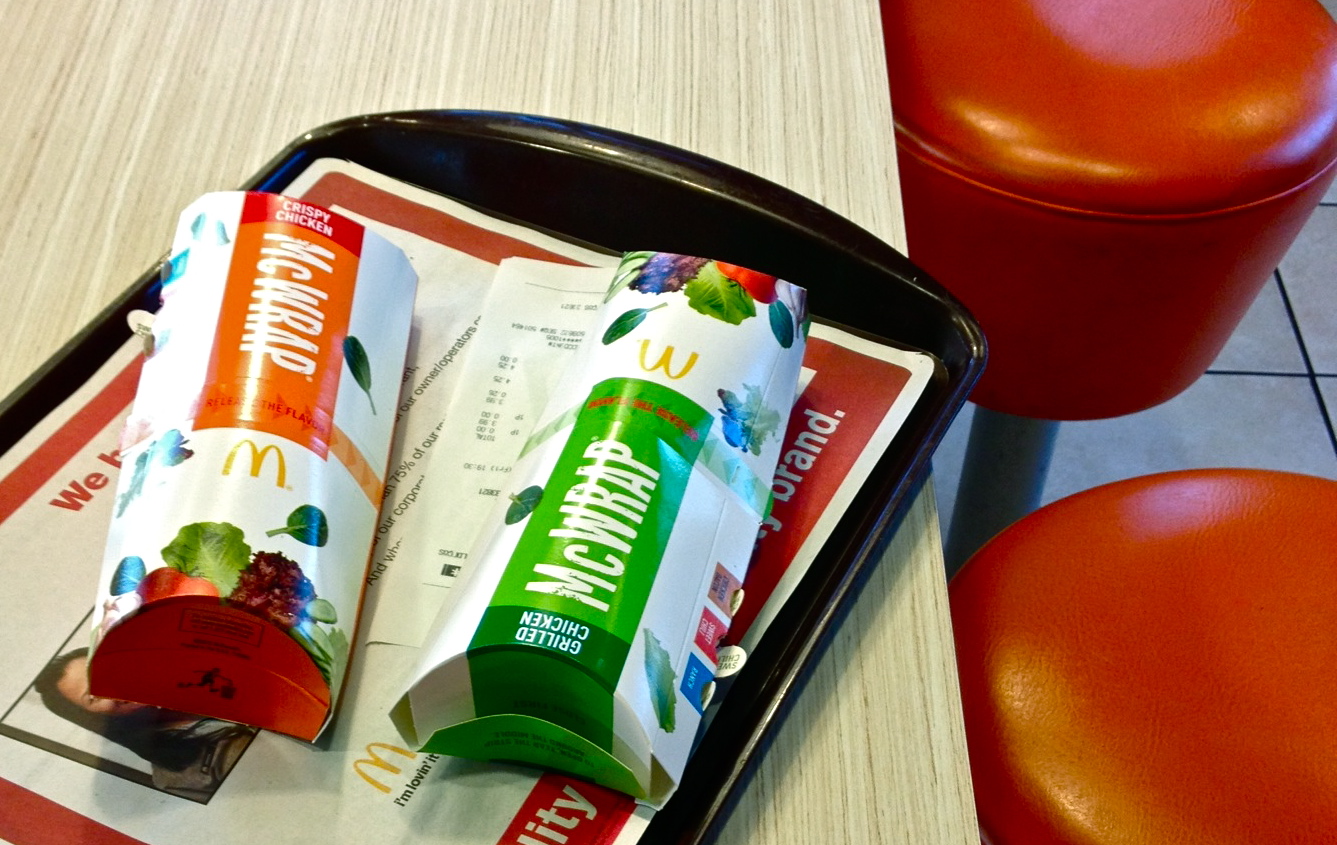 The sun was setting, the food was great, the weather was perfect and the music sublime.
I never thought there could be so much to say about dinner at Mickey D's :].

And then there was that one time where a cockroach jumped on my shoulder. Yeah I highly recommend to avoid this situation. Guess he didn't get the memo about the welcome mat. [If you have no idea what I'm referring to, then you should read my blog more often. :] ]

We made our favorite hash browns! [+Zane has informed me that it's hash browns and not hash browns. Tomayto tomawto.] [I've decided that it is illegal to say tomawto.]

These are the best we've ever had! We're using sweet potatoes next time :].

For more of my foodieness and fitness[ness?], visit my new blog!

Thanks for stopping by, and have a wonderful week.

Frog Legs at the Bayou 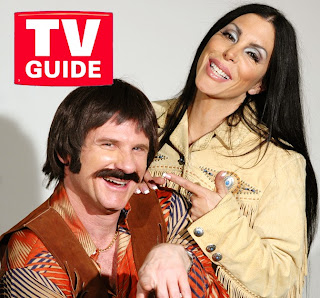 [Colloquial greeting from the Yuke.] [Yuke = UK for those who aren't hip and with it.]

Whilst on the subject. In America The Great, if you have a foreign accent you're automatically smarter slash cooler. Can someone please tell me that we have a ceteris paribus agreement with the rest of the world? [Ceteris paribus essentially means equal in Latin. Now you know a term in Latin. So your automatically awesome. And I hope a Latin-speaking person would feel cool when they learn how to say something in American English.] [And if you find a Latin-speaking person let me know and let me use your time machine.] Moving on. 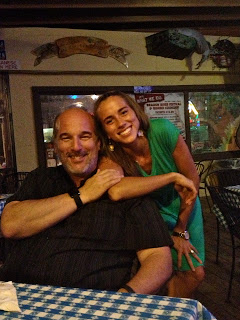 I can never get enough of Florida. Especially Lakewood Ranch. Everything is about family, friends and community. This place is filled with amazing parks after parks, literal jungles, playgrounds, pools, soccer fields, tennis courts, basketball courts, lush foliage [such a gross word. couldn't think of another.], and, families. Case in point; just went with the Balles to a huge park that I had never even seen before, and it was five minutes from home! There was so much to do. We were there for like two hours, IN ONE AREA. Which is awesome because obbbbviously we will just have to go multiple times to get the full experience :]. We explored one of the trails and I literally had to convince myself that we weren't in Bangkok. We found this hidden yet ginormous bird castle. The most insane/tropical birds I have ever seen.
We had no idea what they were! They were making the strangest noises. We heard a monkey. No joke. There were like a brillion [combined trillion and billion for cool points] lizards covering the entire trail. Some of them didn't have tails... maybe it was like a fashion statement or something. We found a HUGE turtle! He was very sassy. Dawson immediately fell in love with him and would not stop following him into the jungle! [When I say jungle, I seriously mean jungle.] We got to go on these hidden rope swings; it was awesome. Felt like Mowgli the entire time. 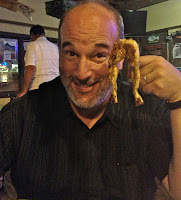 +Brad aka Dad came to visit last night! +Zane and I have calculated that, although we live on the other end of the planet [humor me], we have had six visits from family in less than a year! Thank you, Howard Hughes. The three of us went out to dinner and had the ultimate Florida adventure.

The Linger Lodge. A restaurant. In an RV camp. On the bayou. Hidden behind the Spanish Moss and palm trees. The interior designer must have been a taxidermy hunter. The food was NUMMY. Especially the frog legs. Dad ordered the BEST alligator chowder, blackened alligator and fried green tomatoes. +Zane had a huge crab avocado salad and uh-may-zayng ribs. We all shared the River Bottom Pie! While we were eating, these hilarious old men were singing karaoke from the 50's. Zane and I just had to give in and share our [attempts at] singing with the world. Problem was: all songs were made before jogging was invented. We decided to go with a Sonny and Cher classic; I've Got You Babe. Luckily no one was in the room when we belted this golden number. We had so much fun there and will become the regulars. 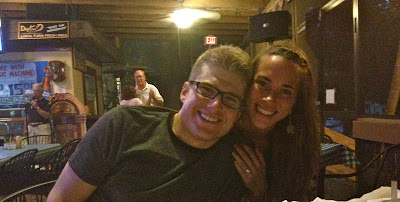 Well friends, my career has begun :]. I'm a Personal Trainer! +Malori is my first official client! I have another blog now; Pow! Exercising, sports, fitness, whaterr you guhn call it, has been my life. For my entire life. And will be for the rest of it. For the past couple of years, my interesting health situation has made me appreciate and delve deeper into food and fitness. This blog is interactive; you present a question, I offer a solution or advice. Nutrients, muscles, pains, programs/techniques, recipes, etc. [The kind of recipes where you already HAVE the ingredients. Hah seriously. Every "15 minute dinners," "easy recipes" website that I see should be renamed, "Dinners that are easy if you have all ingredients that no one ever has or has heard of." I'll have my first post on Pow! tomorrow :].

Let me just start off by stating my position on all vermin. They've clearly been confused by the homo sapien tradition of a "welcome" mat on a doorstep. However, I show no mercy to these vile jive turkeys.

My mat does not and will not welcome you, you nastay thang. Humans only. 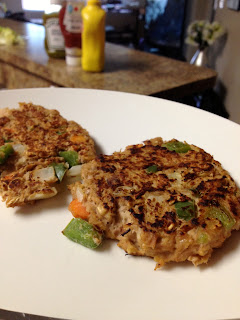 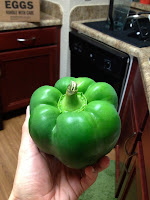 On a tastier note; food. I love food. [I was going for the whole "I love lamp" mood... didn't work.]   I had to take a picture of this amazing green pepper before I ended it's superlative and [literal] spotless life. Like that's how in love with food I am [even though I do eventually and happily eat any and all]. This pepper and a can of tuna [ew] gave me one of our new favorite dinners; tuna burgers!! WOW. You really cannot taste/smell the tuna. Better than a turkey burger, cow burger, weaksauce boca/veggie burgers [which are filled with cheese in case you forgot], etc. Cheapest kind, healthiest kind, yummiest kind. [Recipe is below :] ]. 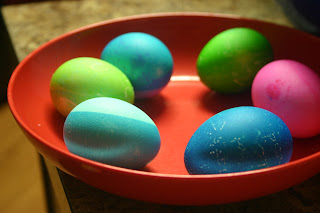 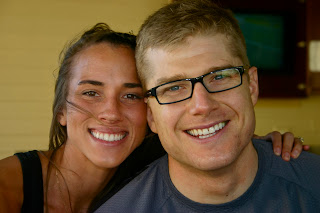 Prefacing the most wonderful Easter Sunday was lots of work and lots of play :]. +Malori and I had an amazing night at our complex with free dinner and my FAVE Disney movie [while outside!], Brave! [Rhymed. NBD.] +Zane and I went to +Malori and +Kristian's for an awesome game night with our newfound friends, Haleigh and Mike.

+Malori and I got more clients for The Crate Escape! Spent lots of time planning a LECOM event with my SAA [Student Advocate Association] presidency, especially with my girl +Kailey. LOTS of time went into making new tee shirt designs, meetings, prepping the food, making flyers,etc. It was most definitely worth the work! We had a perfect turn out, great food, lots of beach volleyball and ping pong, and, most importantly for our hardworking significant others; rest. 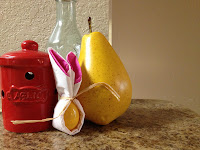 And then it was Sunday. Easter Sunday! Yay! It was packed and perfect.
We ate our favorite breakfast; pancakes. The kind that you don't regret after consuming mass quantities. [Recipe below :]] After church we had a Resurrection egg hunt. 12 eggs, filled with scriptures and figurines representing why we celebrate Easter. Then, we had a lovely dinner that took my tastebuds to yummy town. Marinated pork chops, veggies, homemade [fat-free] gravy, rosemary potatoes and, of course, homemade carrot cake [exhibit H of food/cooking obsession]. After dinner, we had SUCH an awesome egg hunt with the Balles. +Zane and I filled our plastic eggs with the candy we like and dyed hardboiled eggs [which failed miserably] and the Balles did the same [minus the failing part].
We each left our eggs in our apartment, went into the other apartment and hid the eggs! Then, we hunted :]. Hah we still have not found half of them; whaterr. 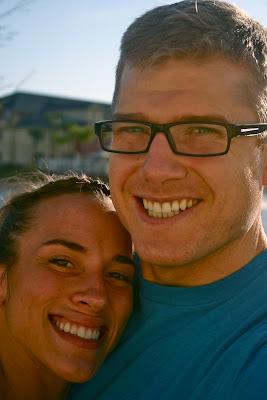